CLICK AND SEE ALL THE TOURS to that visit Meteora in guided tours or independent train trips.

Following the paths of monks to Meteora

Meteora is a complex of Greek Orthodox monasteries built on natural sandstone pillars. Today four monasteries and two nunneries are open to the public.

If there is one place that you must visit this is Meteora in central Greece. This Eastern Orthodox monastic complex is unlike anywhere else in the world – and despite how overused this phrase is nowadays, at Meteora it gives the exact picture. If the unearthly landscape of massive pillar-like mountains and columns weren’t striking enough, monks went ahead and built huge monasteries ON TOP of them 800 years ago. 6 of them are still working monasteries and are open to the public.

A view from Meteora is spectacular no matter where you stand, and it will make even the most seasoned traveller to say “wow”. Greece is full of spectacular sites, but you will not find one more unique and with so many fabulous views as in Meteora. The World Heritage monasteries of Meteora, are an extraordinary sight. 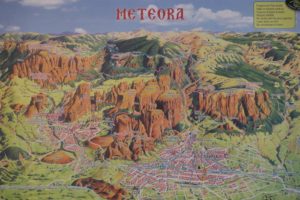 Built on top of huge pinnacles of smooth rocks, the monasteries provided monks with peaceful havens from increasing bloodshed as the Byzantine Empire waned at the end of the 14th c. The earliest monasteries were reached by climbing removable ladders. Later, windlasses were used so monks could be hauled up in nets, a method used until the 1920s. Apprehensive visitors enquiring how often the ropes were replaced were told ‘When the Lord lets them break’.

These days access to the monasteries is by steps hewn into the rocks and the windlasses are used only for hauling up provisions.

Don’t miss this unique place at this special price!

The monks’ love of God and of monasticism and asceticism formed the impetus for this miraculous way of life on the rugged spires of the plain of Thessaly. Monasticism is the highest calling and the path that leads most directly to holiness. It is the complete devotion of the human person to God. It is the imitation of the angels in divine love, chant, obedience and the ministry of souls, which is why it was called ‘equal to the angels’ and an ‘angelic state’. The entire life of a monk consists in fully opening the heart to God and keeping His commandments, in constantly striving for sanctification and praying continually. Whether working, studying or in the stillness of prayer, the monk is unceasingly crying out to the Lord in the heart with the brief prayer, “Lord Jesus Christ, Son of God, have mercy upon us”.

Over the centuries the Meteora monasteries were seed-beds of holiness for a multitude of monks, a bastion of faith and civilization, treasuries of the values and virtues of the Greek Orthodox spirit. Here, the unparalleled natural wealth of Meteora coexists in absolute harmony with discreet human intervention; intense spiritual striving and devotion to God is juxtaposed with a love of beauty and culture; the harsh ascetic way of life stands side by side with the refinement of art and artistic creativity, with the sole purpose of glorifying the Creator.

The monks’ ascetic struggles were characterised by heroism, their spirituality by a spirit of self-sacrifice, self-denial and support to the troubled souls who sought refuge in these strongholds of Orthodoxy. Thus the monasteries of Meteora became the watchful custodians and guardians of tradition: they became schools for the Greek children under Turkish rule and a refuge for the persecuted, they offered provisions to the freedom fighters and at the same time gave an education in holiness and salvation.

The valuable ascetic tradition of Meteora, the large number of saints who have lived on the hallowed spires, its rich liturgical life and many relics, which are its most precious treasures, together make the monasteries vital centres of Orthodox spirituality.

Meteora is a holy land, a sacred space created and guarded by God, its cliffs and caves and ravines sanctified by the host of holy ascetics and martyrs of the Greek Thebaid who have inhabited them. A contemporary saint, St Porphyrios, used to say: “I speak with the rocks, for they have so much to tell of the ascetic life of earlier fathers”.

Over the last fifty years a remarkable programme of restoration has been carried out to the monasteries of Meteora, as a result of the hard work and tireless efforts of the energetic and worthy abbots and monks, the watchful care and blessing of Metropolitan Seraphim of Stagoi and Meteora and the excellent collaboration of the Ephorate of Antiquities of Larissa (formerly of Trikala). This major undertaking includes extensive reconstruction work, the preservation of frescoes and treasures in the monasteries’ collections and improvements to the surrounding space, making Meteora one of the most spiritual and attractive destinations in the world.

The monastic communities of Meteora participate in liturgical life and attend to the many visitors with love and sensitivity. In addition they preserve and maintain the sites, paint icons, embroider with gold thread, create miniatures, produce beeswax candles, incense and small icons, cultivate the monastery gardens and keep bees. Their publications include studies in history, theology and hymnography. However, their primary purpose is to offer a living witness of Christ in an age which is spiritually barren, when people have lost their sense of national and religious identity and are experiencing a crisis that is not only economic but also spiritual. The monks strive to preserve the precious legacy of their faith and rich tradition and to highlight their inestimable value in modern times.

The origin of the monastic community


Perched high atop spires of conglomerated Calcerous and sandstone rock, the monasteries of Meteora are one of the world’s most spectacular sacred sites. Located in the Thessaly region of North Central Greece and overlooking the valley of Pinios, the towering rocks of Meteora, meaning ‘rocks in the air’, have long evoked awe in human beings. Paleolithic remains indicate settlements around the stones from between 100,000 to 40,000 BC, and hermits and ascetics have lived in the area since long before the Christian era. The arrival of Christianity began in the 8th century, organized monastic communities had developed by the 12th century, and by the mid 1500’s twenty-four Greek Orthodox monasteries had been constructed upon the spires of stone. The monasteries, 200-600 meters high (and some accessible only by baskets lowered by ropes and winches), became a center of scholarship and art until the mid 18th century when popular interest in monasticism declined. Most of these meteorisa monastiria (‘hanging monasteries’) were abandoned and today only six survive, of which four can be visited by way of bridges and rock-cut steps. Previously a remote area, the construction of a highway in the early 1960’s made the monasteries accessible to pilgrims and tourists. This influx of visitors, however, has discouraged new monks from joining the monasteries and compelled others to move to Mt. Athos in search of solitude and privacy.
Orthodox Monks started to populate the area of Meteora over 1200 years ago, initially searching for quietness, peace and the perfect environment

Lifting system with ropes in Meteora to pray and meditate. They were living in caves like hermits, with little human relations. Beginning of the 12th c. they started to congregate and create the first monasteries. To make things more difficult, they decided to build their communities on top of rocky peaks, apparently inhospitable places to live in, but with more protection from the outside world, and amazing views to enjoy daily.
Approching Meteora the visitor wonders how could they manage at that time to climb these steep peaks with very little equipment and later to carry the materials to build the monasteries. The cliffs are as high as 600m (1800 feet) from the plain level, and hardly accessible even today to equipped rock climbers. Originally entrance to the monasteries was possible only with ladders, or ropes connected to nets, used to lift goods and people. Not only it was adventurous, but also really dangerous, since the legend say that the ropes were changed only “when the Lord let them break”. The advantage of such an access system was that the ropes could easily be lifted to protect the monks from external threats. The biggest expansion of the monasteries had place at the end of the 14th c, when Greece was threatened by Turkish invaders, and monks from other areas of Greece took refugee in Meteora, building a total of 24 monasteries, progressively abandoned in the last two centuries.

While walking in Meteora you see buses packed with tourists going from one monastery to the other without even stopping on the way to enjoy the amazing views. They miss the magic of this place, the fusion of the human-made monasteries perfectly integrated on top of incredible rock formations. We advise every visitor not to do the same mistake and to try and enjoy the route in between the monasteries!

© 2023 - Tours to Meteora | Aneeq WordPress Theme By A WP Life | Powered By WordPress.org